The Unveiling of the Cover for Enigma Black

First of all, I'd like to wish a very Merry Christmas and Happy Holidays to all of my followers.  You've all aided in truly brightening a rather dismal year for me. Here's to hoping that 2012 is a million times better.
Every writer develops a vision of their work at some point in time during the writing process.  A vision of their characters (whether they're short, awkward, have freckles, or jet black hair).  A vision of the setting (in the middle of a bustling city, a blooming meadow, or lost in a galaxy far, far away.  A vision of  each scene in the novel (the looks on their character's faces during a pivotal moment, the intensity of a fight, the beauty of the summer day when the hero and the heroine share their first kiss).  When and where this vision occurs depends upon the writer and can vary, being as fickle as a Bachelor contestant. For some, this vision may change repeatedly during the writing of the first draft and again during the final editing process.  For others, it was the vision that inspired the book to begin with:  A photograph taken on a beach overlooking the aquamarine shimmer of a wave hammering the shore; watching a mother and child holding hands in a hospital bed; or the malevolence of an abandoned building rising toward a darkened sky.

In my case, Enigma Black (a science fiction/dystopian/superhero novel about a woman who transforms from victim to assassin) was born from images; a series of dark images, coupled with my admiration of the music of Evanesence and a brief detachment from reality.  Of course, just as the characters, setting, and scenes are visualized, naturally, so are the covers encasing those visions. I have to admit, when it came to the cover, I had several different visions in mind.  I'm more of an abstract person.  To me, a little can say a lot.  With that in mind, I didn't want my cover to be too busy, but more of an accurate reflection of the inner turmoil faced by each of the characters with a hint of mystery attached to it.  I also wanted the colors (red and black) depicted in a painting in one of the later chapters to be represented as they represent the good vs. evil struggle that is prevalent throughout the book and the series as a whole.

With all of that in mind, a wonderful graphic designer came up with the amazing e-book cover shown below that I believe is the perfect culmination of all of my visions for Enigma Black: 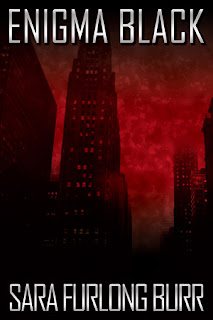 The aforementioned designer assisting me with bringing my vision to fruition is the very talented George Arnold, graphic designer at WGA Designs (and the husband of the equally as talented author, Carolyn Arnold).  To see more of George's wonderful work, click the link to Carolyn's blog or contact him at george.arnold@rogers.com.
Actually having a cover is motivating me to work even harder on my final edits.  As the time draws nearer to my novel's actual release, I'll post a brief synopsis and sample chapter on my blog.
My next post will return to business as usual for my subscribers and will focus on getting through the daunting editing process.  Have a great week!
Posted by Sara Furlong-Burr at 11:58 PM 2 comments: