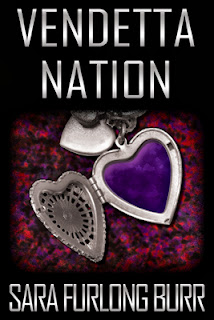 What if you gave up everything you knew and loved for a lie?

Nearly one year ago, Celaine Stevens made the choice to leave her life behind to join The Epicenter, an organization charged with bringing down The Man in Black -- a terrorist and the one responsible for the murder of her entire family. Battling conflicting emotions and the pain her decision caused, Celaine tells herself that her sacrifices will all have been worth it when The Man in Black is finally apprehended.

But, instead of hunting the elusive entity, Celaine and her partner Ian Grant find themselves preparing for a war looming on the horizon. Angered by President Brook’s ever-tightening restrictions, a rebellion has formed, leading the charge against the President and anyone who stands in their way. Caught in the middle, Celaine and Ian are forced to choose sides, having to decide whether to align themselves with the rebellion, whose motives they question, or obey the orders given to them by an organization they are steadily growing to distrust.

A war is sparked by deceit, new alliances are formed, an unexpected love begins to blossom, and true identities are revealed in Vendetta Nation, the second installment of the Enigma Black trilogy.

I've been waiting on pins and needles for the this book after finishing the first, and it was definitely worth the wait! The storyline is just as compelling, and the characters so well-written, you can't help but love or hate them. Celaine and Ian's fight against the Man in Black continues but not-so-new foes take a big step forward in the plot of this story, which I can only imagine will lead to an epic clash in book 3. Relationships are changing at the same time, and I find myself unable to pick a side because I love all the characters involved, so I can't wait to find out how it all ends!