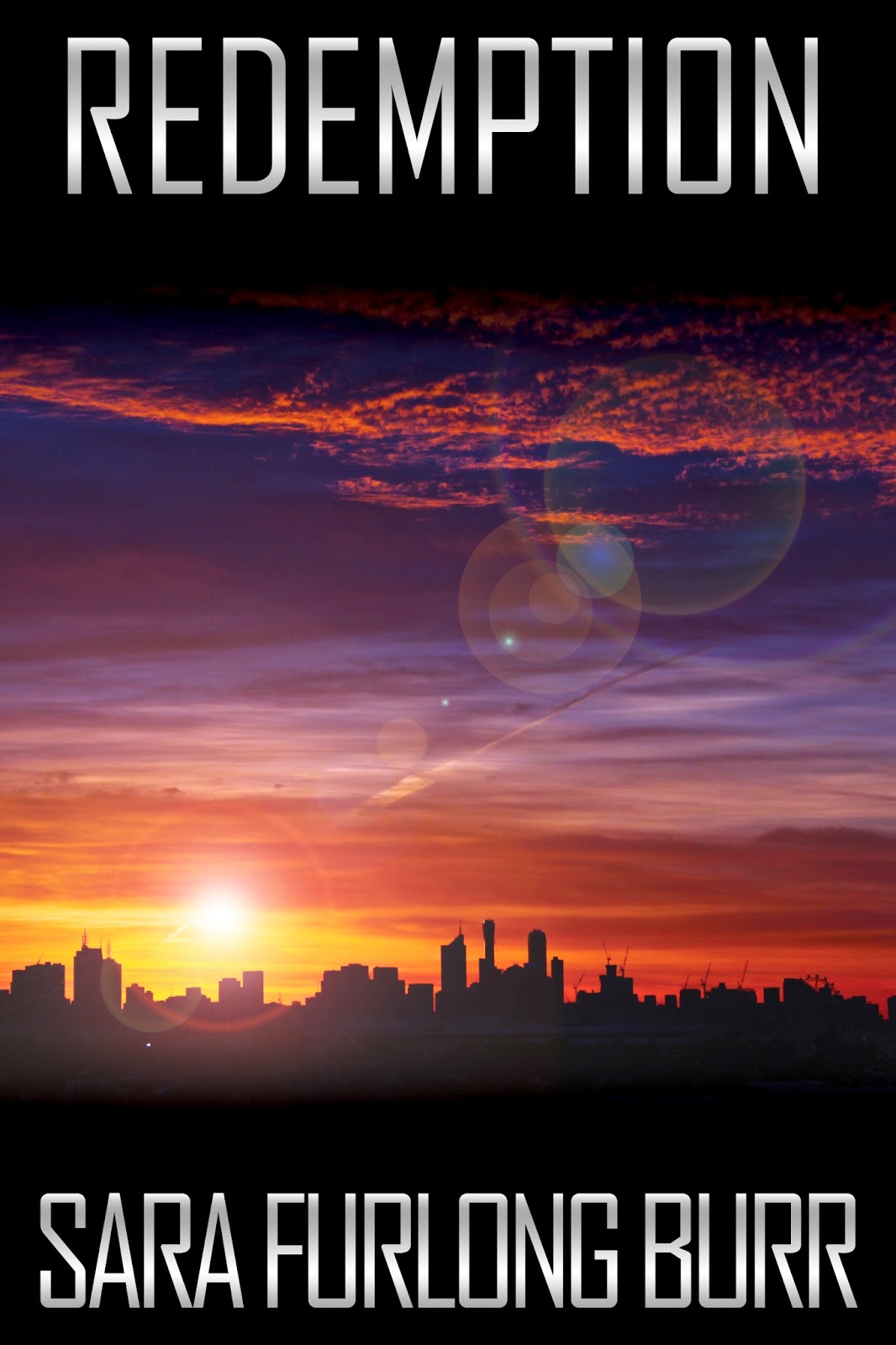 One year ago, she left her life behind for a chance to avenge their deaths.

Twenty-four hours ago, her defiance sealed her fate.

With her suspicions mounting and her loyalty to The Epicenter tested, Celaine Stevens makes the decision to fight for a cause she believes in and aligns herself with the rebellion. Joined by Ian Grant, the pair escape from The Epicenter and travel to the Capitol, where they find Marshall Leitner and his followers. While inside the rebellion, Celaine and Ian learn that the rebels are planning a final uprising against President Brooks, one in which they hope will sway the rest of the country’s opinion in their favor.

However, loyalties are soon tested. The rebels are finding it hard to trust them, so when a bounty is issued on Celaine and Ian by President Brooks, it may be too good for some of them to resist.

As the nation goes to war, Celaine finds herself in the fight of her life. Vendettas will become personal, lives will be lost, and the world will never be the same again.

“Life is full of tough decisions, Chase. Decisions that may make a person seem horrible, when in reality that decision was the most humane thing they could have done. A person isn’t horrible for having second thoughts, for realizing they’ve made a mistake, and then deciding to correct it before it’s too late. What makes a person horrible is when they do nothing. When they string other people along with them through their misery when they could have let them go to find happiness elsewhere. What’s horrible is seeing the light leave your eyes and taking theirs with it.”

Updated August 23, 2014-Redemption has gone through its first round of editing and will be off to beta readers soon!

Updated July 17, 2014-I am nearly complete with the first draft of Redemption and will periodically update this page to keep you all informed of my progress and an actual release date.

Updated April 5, 2014-Can't wait until summer?  Read the Prologue below (subject to further editing and revisions):


I could hear the beat of the drums. They reverberated in my head, a war cry only audible to me. Their disembodied rhythm tore its way through my veins, energizing my soul, reviving my battered body. Ignoring the pain, the holes in my tattered suit, the screams from the dying city I once called home, I charged on to the sound of their deafening chorus.


With each footfall, images crept into my mind, playing in a continuous loop. Images of my father and mother, of Jake, Lucy, and Blake, whose lives had been lost in this decade of chaos we’d come to know as life.


It would all end tonight.


No more would a child know the meaning of the word death.  No more would our cities remain abandoned, hollow shells of the hubs of prosperity they once were. Fear would loosen its grip on society.  The deaths of those we loved and of those who loved us would not have been in vain.  Tonight would be the end, and we were willing to die to ensure its demise.


We would die to ensure his demise.


Next to me, Ian ran, keeping up with my fevered pace, his body just as bloodied and bruised as my own. We were both numb.  Too numb to notice the agony we should have felt, too numb to care what happened to us anymore; for we had been deceived in the worst possible way, and deception had a way of turning suffering into fuel, igniting unbridled rage.  Ian lunged forward, overtaking me, a flap from his torn suit bounced with each step he took, exposing his left shoulder blade.  Blood, caked with dirt, dotted his exposed flesh, revealing a hint of an injury kept hidden by the remaining material. I wondered whether he could hear the drums, too, or whether he heard anything at all.


I sped up to catch him, jumping over a pillar that had been toppled over, presumably by one of the many explosions that had rocked the city over the past couple hours. Had I not grown up here, I wouldn’t even have recognized some of the buildings for what they once were.  My former high school, the bank where’d I’d spent my final days of normalcy, and the diner where Blake offered me the chance to rid myself of my nightmares, were now nothing more than indiscernible piles of concrete.


In the streets, dodging debris, escaping smoke and flame, survivors of the attacks ran haphazardly, seeking refuge where none existed.  Above us, the late evening sky, reddened by the flames that hugged nearly every block, took on the appearance of fresh blood flowing from a gaping wound. If someone had asked me before that moment what I thought the end of the world would look like, my description would have paled in comparison to the scene that was splayed out before us now.  We were no longer on Earth, but in the very bowels of Hell itself.


This attack had been personal, but then again, they all had been personal in a way. The crazed vendetta, the evil that resided in the entity the people had come to know as The Man in Black had unleashed itself to the nth degree. Perhaps sensing his reign of terror drawing to an end, he was determined – no, desperate – to go out with a bang…and take out the last of those I had known and loved in my former life in the process.


“Turn left down the next block,” I instructed Ian, hoping he could hear me through the insanity surrounding us.


“There’s a next block?” he responded, his pace slowing a notch. “How do you tell where one ends and the other begins?”


“Follow me.” I passed Ian, picking up my pace. Whatever happened tonight, whatever happened to me, I couldn’t – no, I wouldn’t – let them suffer for the choices I had made. Out of the corner of my eye, I could see Ian, matching me stride for stride, unwilling to let me dive  headfirst alone into the imminent confrontation that awaited us. Swiftly, I rounded a corner next to a small café near my old apartment building and bolted down an adjacent alleyway.


“How much further?” There was a touch of apprehension in his voice.  I had noticed it building with each step we made, with each breath he took.


“Five blocks,” I answered him in an unaffected tone, trying to keep my own fears from betraying me. “The lodge is five blocks ahead.” My voice shook more than I would have liked.


“Are you okay,” he asked, concerned.


So much for being the strong one. Ian gazed at me between periodic glances back at the street ahead of us; his green eyes pierced through my helmet as though he was trying to see inside my soul for the answer. “No,” I finally answered him truthfully. “There’s nothing okay about me right now.”


“We’ll find him, Celaine.  We’ll find Chase and the rest of them, and we’ll get them out safely.  It’s not them he wants…”


“Exactly, Ian. It’s me he wants. I’m the reason for this.  If they die tonight, it’s because of their association with me.” I paused, the tears welling in my eyes, momentarily blinding me.  “If you die tonight…”  Suddenly, my body was forced to a halt as though I’d been strapped to a tether that had run out of slack. Looking down at my arm, I saw Ian’s hand and the firm grip his fingers had around my wrist.


“Listen to me.” He pulled my mask up, forcing us to stand face to face, green eyes to brown eyes. “I’m not even going to pretend to know what’s going to happen tonight, or what the final outcome will be. Whether we survive this nightmare, or whether we don’t, I just want you to know that there’s no place I’d rather be than fighting alongside you right now, no matter what the consequences. Leaving Norfolk with you was the best decision I ever made, and nothing, nothing, will make me regret the chain of events that brought me to this place at this very moment.”


I felt a tear escape from the corner of my eye, and Ian’s gloved hand swiftly wiping it away before it had a chance to fall down my cheek. “Ian, I…”


“I know you don’t feel the same way about me…”


“Let me finish my thought,” he interrupted me again, gently touching his fingers to my lips. “Please, Celaine, just let me just get it out. Then after I do, you can tell me how wrong I am.” The tiniest hint of a smile crept across his face, the rest of which was betraying the coolness he was trying so hard to project.  I nodded without taking my eyes away from his, and the new creases that had developed in the corners of them over the past few weeks. Worry.  We’d both experienced enough of it to last us a lifetime. “I know you don’t love me the same way you loved him, or, perhaps, the way you still love him now,” he began again.  “And although that’s frustrating as hell, I also know that I can make you happy again, and I think you know that, too.  You’re just too afraid to admit it to yourself.” He caressed my cheek, pausing to let me absorb everything he had just said, not expecting a response in return.  “All I ask is that you promise me one thing.”


“Anything,” I answered him automatically, knowing that I meant my response wholeheartedly, even though I hadn’t fully processed the weight of his words.


“Promise me that if we both make it out of this alive, you’ll give me a chance to make you whole again.”


The tears fell down my face unhindered in their descent. “I promise.”


Ian leaned in closer to me, pressing his lips to my forehead.  “Thank you,” he whispered.


We stood there together in an embrace that no amount of force could separate – an island in the sea of chaos that crashed around us – before finally allowing reality to set in again.  Together, we resumed our journey into the unknown, to whatever fate had in store for us.


I could hear the beat of the drums. Their echo haunted me with every step I took, with every beat of my own heart.  They beat for Ian, whose love I didn’t deserve; they beat for Chase, whose life was now in our hands.