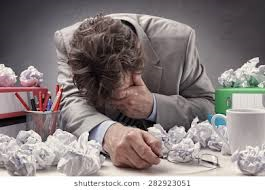 "Confidence comes not from always being right but from not fearing to be wrong." ~Peter T. Mcintyre

"Our doubts are traitors, and make us lose the good we oft might win, by fearing to attempt."  ~William Shakespeare, Measure for Measure, 1604


"Once you become self-conscious, there is no end to it; once you start to doubt, there is no room   for anything else."  ~Mignon McLaughlin, The Neurotic's Notebook, 1960

I recently found myself feeling the need to resurrect this old post, namely because it was one of my more popular posts and, even several years later, it still rings true. Writers often deal with crippling self-doubt, whether from a biting review or lack of confidence. Most of the time, the feeling is fleeting, and we're able to shake it off. But sometimes, it's not, and I hope this post will serve as a catalyst to help pull anyone finding themselves creatively disabled out of the self-doubt rut.

Self-doubt: the bane of any writer's existence.  It's the dark cloud looming on the horizon, threatening to rain down self-loathing, inferiority and regret.  In short, it's the one thing that can end a writer's career before it even has a chance to take flight.  With its uncanny knack for stifling one's creativity, self-doubt renders its sufferer an empty shell.

I don't believe there has ever been an author who--at one point in time--has never suffered from a minuscule amount of self-doubt.  Recently, I've had my own bouts with this affliction and the symptomotology has been enough to render me virtually useless.  In going through my manuscript and some of my former blogs, I've noticed glaring typos and grammatical errors--I should, at times, be locked away for comma abuse--as well other cringe-inducing faux pas.   As my blogs are being shared and re-tweeted (of which I'm extremely appreciative of), I often find myself critiquing the hell out of what has been passed around and fear I may not be living up to the high standards I try to set for myself.  This stems partly from sheer fear; fear of being rejected by those in the community I'm striving to gain acceptance in.  The other part is being exposed to those who write so flawlessly and so seemingly effortlessly that I often wonder if they have the same fears and self-doubts that I do.  The answer to that is, I'm certain, a resounding YES.

The question is how do you prevent it from consuming you and your writing?   I believe the answer to that is through lots of practice, support and self-motivation.  Now let's analyze some techniques, shall we?  (Too bad, we're going to anyway...)


Find a writing partner--A writing partner or support group of fellow writers is invaluable to any word- crafter.  It's imperative to receive both good and bad feedback (constructive criticism) and to have mini cheerleaders, motivational speakers and drill sergeants by your side at a moment’s notice to both encourage your pursuits, celebrate your victories, tell you what works and what doesn't, and most importantly, to prevent the storm clouds from rolling in. Before I started involving myself in social networks, I had a small group comprised of family, friends and co-workers who would read my work and provide me with the encouragement I needed when I wanted to chuck my laptop across the room (because a bad writing day is all that blasted computer's fault, don't cha' know).  After I joined social networking sites for writers (or ones that just harbor a substantial writing community such as Twitter, Blogger, Absolute Write, Query Tracker, Tumblr, Facebook, Goodreads, etc.), I felt as though I'd arrived home.  These communities offer a seemingly unlimited amount of talented aspiring authors and published authors, alike willing to dispense a plethora of advice and support.  After all, we're all in the same boat so why not travel together?


Quit standing in your own way--I know there are famous quotes out there that roughly state something about being your own worst enemy and creating the barriers that block your own path to success.  Well, they're all completely true. The human mind is a beautiful oddity with the ability to both propel a person into greatness or cast them aside in the gutter at the slightest twist in thought. However, it's when one allows those negative twists in thought to consume them that the problems really begin to erupt, and minor problems such as grammatical errors and the writer's own fickleness in wording forces them to question their abilities. It's one thing to be critical of your work with the intent to make it the best it can be, it's a completely different story to beat yourself up over a misplaced comma.  Have faith in yourself, your errors aren't as glaring as you believe them to be.  And when you feel like giving up, take a walk, watch a movie, or do the moonwalk to take your mind away from the negativity. You'll be pleasantly surprised by how much a break and a set of fresh eyes will vastly improve your disposition.


Not everything you write is going to be bestseller--Wouldn't that be great, though?  You, sitting at home and typing away, knowing there are a whole slew of famished individuals out there ready to feed upon your every word.  Alas, for most of us it's time to wake up from this dream, for we know it takes work--lots and lots of agonizing, frustrating work--before we even see a tenth of that kind of success.  That is, if we ever see any success at all.  To be a writer, you must remove the stars from your eyes and humble yourself with the sobering truth that writing isn't going to make you rich and famous.  With that truth, thankfully, also comes the equally as truthful statement that that's pretty much the norm for most writers and it isn't because your work isn't up to snuff that you aren't a multi-millionaire.  Write because you love it; because it makes you happy.  Don't write because you believe it to be your meal ticket or that success equals validation of your abilities.


Comparing apples to elephants--The worst thing you can do as a writer is to compare your work to that of others because, unless they're absolutely terrible or you have a slightly inflated ego, you're probably going to surmise their work as being on a level much higher than yours. I'm insanely guilty of this.  Whether it be friends, fellow bloggers, writers, or published novels, I'm constantly critiquing my work against that of others.  Where does this get me?  A night without a single word written, a woe-is-me state of mind and a chocolate massacre on my hands (and face, and probably somewhere in my hair, as well).  Your novel is yours and no one else's.  Your writing style is unique to you. How you write and what you write is a mark of your true identity, setting you apart from the rest of the pack.  To compare your work to the work of another is like trying to compare your DNA with theirs.  In the end, the strands will never match and to tinker with one to make it comport with the other will only result in a contrived, mutated product.  Different is good; variety is the spice of life; Pepsi is way better than Coke...oops wrong blog.  The point is, your style is unique, special, something to be proud of and chances are the person you're relentlessly comparing yourself to thinks the same way about their work when compared to yours.


You possess the same tools as the next person-The beauty with fiction writing is there isn't a single person out there who is more qualified or who possesses a clear advantage over you (unless they're a celebrity, but that's a topic for another day).  We all come equipped with a brain comprised of creative, technical threads, enabling us to put sentences together to create characters and worlds beyond the scope of reality. Although some naturally have more than others, all of us come off the biologic assembly line with drive and determination ingrained deep within our souls. Our collective brains, drive and determination, though differentiated by thoughts, execution and persistence are the tools every writer needs to succeed.  It's how one chooses to use them and how one lets their self-doubt affect their potency that makes all the difference in the world.


Great expectations--If you're like me, you tend to set the bar at the peak of the mountain. Some days you're able to clear it so effortlessly you think your writing will ascend into orbit.  Other days, you're barely able to hurdle over a blade of grass and you feel your writing is on par with that of your toddler's (my daughter can blow me out to water most days with her creativity).  At the risk of ripping off Charles Dickens, setting great expectations for yourself is both healthy and necessary if you plan on succeeding at anything you set out to do in life. Yet those same expectations--if left to run rampant--can also be your undoing.  Don't make your great expectations impossible ones.  Instead of trying to clear hurdles in the sky, concentrate on those down here on Earth first.  Not to be cliché, but Rome wasn't built in a day.  Like your literary dreams, it takes time for empires to emerge.

Creativity is key--For a writer, creativity is second nature. Telling a writer to be creative is like telling a kid to play at Chuck-E-Cheese; it's just going to happen.  When you write and you get stuck on the way your dialogue, sentence structure, narrative, or overall thought process is panning out, don't think to yourself, well, I'm not going to be the next Sara Gruen, keep writing. Allow your creativity to flow until you've either worked out your problems or completely replaced them with new, even better ideas.  Perhaps open a different document to draft alternative scenarios or move on to a completely different chapter in your book and come back to the section that's plaguing you when you feel you're better able to tackle it.  After all, the world doesn't need another Sara Gruen, it needs to be introduced to you.


Be positive--I know it's hard to do every day and I'm not saying that it's not healthy to have a good cry from time to time to clear your head.  It's just that, after you dry those tears and finally leave the pillow you were beating the hell out of alone, you need to move on.  Don't dwell on your problems and frustrations. Fix them.  Even the longest, darkest tunnel ends eventually, and so will the sudden resurgence of negativity encapsulating you.  This is where the writing group mentioned earlier comes particularly in handy. If you're stuck on a plot point or a grammatical dilemma, they may be able to supply you with the ideas and information needed to fix said dilemmas and reign in your self-doubt before it breaks you.

A final tool I've found particularly helpful when I'm in a slump is to read positive remarks I've received on past projects.  Those kind comments and helpful suggestions have a way of rejuvenating me like emotional coffee, giving me the drive to carry on and the ability to leave those negative thoughts in the dust.

Posted by Sara Furlong-Burr at 4:39 PM No comments: