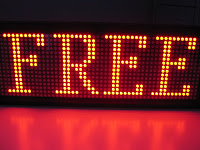 Hi everyone!  I'm running a free promotion for Enigma Black through Amazon KDP Select beginning February 22 through February 25.  The last time I did this, I received nearly 2,000 downloads.  I'm hoping to top that this time around.  Enigma Black has received 22 awesome reviews on Amazon.com.  Hope you all check it out!
Posted by Sara Furlong-Burr at 12:12 AM No comments:

I posted this as a rant on my Facebook page, and decided to share it on my blog as well.
The following review came in this morning on Amazon and Goodreads and had me sweating bullets ever since I noticed that the blogger had marked Enigma Black as “currently reading” on Goodreads. Why was I so anxious? This blogger is known for her brutally honest reviews. In fact, her reviews are so honest that authors whose books she didn’t care for began seeking retribution against her on her we...bsite, giving her books (yes, she’s an author, too) negative reviews even though they’ve never read them. As an author, this behavior by fellow authors sickens me. For starters, you never, ever comment on a poor review (no matter how much it bothers you) and you most definitely never act like a middle schooler and take your frustrations out on someone purely because they were expressing their own opinion. After all, isn’t that what we indie authors are looking for, an honest, unbiased opinion of our work? It irritates me that this particular blogger has had to hide her identity from the public just so she can safely review the books that she PAID for. This just goes to show you that not everyone is ready to hear the truth. Heck, even traditionally published books receive poor reviews. Take any of the Harry Potter books, for example. Do a search on Amazon and I’ll guarantee you that you won’t find a single book in that series that doesn’t have at least one 1* review. “Well, that reviewer must be crazy,” you say. No. It’s just that the book didn’t resonate with them. And that’s completely okay. Just because someone goes against the grain and gives their honest opinion on how THEY feel about a book doesn’t give anyone the liberty to go batshit crazy on them. After all, as indies we have a hard enough time finding reviews and readers for our books. Let’s not taint that further by acting unprofessional.

And, yes, I would still have made this rant even if this blogger had hated Enigma Black.  And, no, I've never spoken to this blogger before, nor do I know who she is, but I'm going to take her up on her offer to contact her on her blog's FB page.

Here is the review from blogger evilicious whose blog is called The Good, The Bad and the Ugly:

I am leaning toward a 5 star but there were a few issues for me that made it a 4 star. Mind you - I LOVED the story overall.

The plot was brilliant, and totally sucked me in. I love stories that are pure escapism - and this was one of those. There were plenty of twists and turns (which I love) . Some were predictable but others weren't. I was not expecting what happened in the last few chapters at all - well I kind of was - but I thought it would involve a different character.

The characters are well drawn, and relatable, the story flowed nicely and was well written. A few minor editing issues, but I have seen worse in traditionally published books.

BTW - ending was a cliff-hanger. You figure this out as you get toward the end of the book so it's not jarring, and it's not the sort of cliffhanger that annoys the crap out of you. Actually I started to worry the author was going to sell herself short (for purely selfish reasons) leading up to the climax, and that it would be a complete read.(Phew!)

Overall I loved the story but it took me a bit to get into for two reasons (but then BAM! Suddenly I was zooming through the pages like nothing else). The dialogue was overly lengthy at some points and was slightly 'off' character if that makes sense, at times. I guess it was sometimes a little formal compared to the narrative. I think there should have been a little more world building to help readers suspend disbelief *SPOILER ALERT (sort of) a nationwide curfew is imposed and I kind of went 'WTF - as if! It would take a lot more than that' , so strengthening this earlier in the story would help, though as I got further into the book there was more to back this up and strengthen it END (the-sort-of-spoiler) ALERT *

There were also a couple of areas where the wording didn't work. One that comes to mind is 'few' meaning three, but the author used it to mean two. Little things like that suck me out of a story.

IN FACT - I think the author might want to do one final edit, taking some of my points into account, and those of other reviewers as I have a feeling this one will rocket up the Kindle charts as word gets out! And we all know how nasty some reviewers can be when a book suddenly gains popularity. (Note to author, feel free to contact me via my FB page if you would like more clarification - I really do think you are onto something here and you should be proud of your achievement. [...] Being an author myself (and no dear reader - I am not about to tastelessly link my books - or even my author name) I understand how easy it is for these things to slip through in the editing process.

Nothing - because despite my few issues (I like to show both sides) this is a brilliant story that sucked me in and the issues obviously weren't enough to stop me reading. In fact I couldn't read it fast enough. An absolute page turner that kept me up late into the - er - morning, and one I wouldn't be surprised to see snapped up by movie producers in the near future. First time I ever said THAT about an indie book!"

Brought to you by Evilicious Book Reviews: The Good, the Bad and the Ugly
Posted by Sara Furlong-Burr at 11:22 PM 6 comments: