Cover Reveal: The Living and The Dead 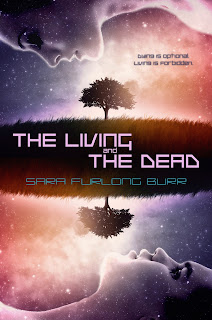 Thank you, Mia Hoddell, fellow author and creative mind behind M Designs, for creating the perfect book cover for The Living and The Dead. Anyone looking for beautiful cover art for their books may want to check out Mia's website: http://miahoddell.blogspot.com/2014/04/m-designs.html

I've taken a little break from finishing The Living and The Dead, somewhat due to personal circumstances out of my control and partially because I've been working on the summary for the book. ...I think you will find that most writers would agree that writing a summary can be even more challenging, more frustrating, and almost as time-consuming as writing the book itself. However, I am still planning for a summer release.


For now, here is the summary for The Living and The Dead:


Dying is optional.
Living is forbidden.

The year is 2111, and scientists have discovered how to cheat death by extracting memories, thoughts, and personality traits from the dying, methodically implanting them into artificial bodies. At the time, it seemed too good to be true, never having to lose anyone to illness or time, and maybe it was.

Rejected as being nothing more than imposters of the living, the dead are shunned by society. Their families, friends, and neighbors, having grown to fear them, erected walls around their cities to keep them out. Over time, those cities were replaced with colonies overseen by governors to keep order.
At seventeen, Zaila Lockhart has only known isolation. Isolation from the world that extends both outside and inside her colony. As the daughter of the unpopular governor, she is the target of resentment, especially now that resources are becoming more scarce, since all trade between the colonies has been interrupted by a group marauders. Starvation seems imminent, and a war between the living and the dead over much-needed provisions looms on the horizon.

In search of food and other supplies, Zaila takes it upon herself to secretly venture outside her colony’s walls. Joined by Pax Muldoon, her only friend, the pair are ambushed by a group of scavengers. Identified as being the governor’s daughter, Zaila is brought back to the scavenger’s base in a city occupied by both the dead and their living sympathizers.

Zaila thought she knew everything there was to know about her captors, that the history being taught in the colonies was rooted in fact. But some lessons are better learned outside the classroom, where the living have grown to fear life, and the dead are the only ones truly living.