My Battle with Stage 1 Melanoma 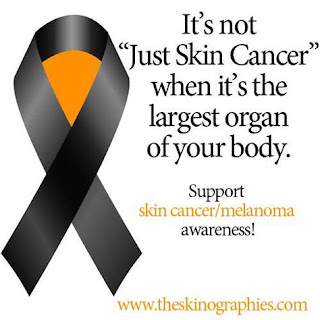 Not the story I usually like to tell, but I think it needs to be told regardless. Obviously, since learning of my diagnosis, I haven't done any work on When Time Stands Still, but hope to get back in the saddle soon.

Did you know that melanoma is the leading cause of cancer death in young women ages 25-30 and the second leading cause of cancer death in women ages 30-35? Did you also know that the incidence of people under 30 developing melanoma is increasing faster than any other demographic group? I didn’t either, until I received my own melanoma diagnosis on July 21st (via a pathology report that was sent to me by email while I was at work).

No one wants to have a cancer story, yet they have a way of finding some of us, demanding to be told. And I feel compelled to tell mine, particularly because of all the “What’s melanoma?” and “Oh, it’s just skin cancer.” responses I received from people when I was diagnosed. While it’s true that melanoma is a form of skin cancer, calling it JUST skin cancer grossly underestimates the magnitude of this disease. It’s a disease where only a mere millimeter in depth can make the difference between receiving a good prognosis and a poor one. It’s a disease where, had I waited another six months, my story may have had an entirely different ending.

Over the winter, I did a double take in the mirror after noticing a mole on my back. It was a mole I’d had my entire life, and it had always been on the bigger side. However, there was something odd about the way the mole looked now. It appeared to be slightly larger, but what was most striking about it was it’s color.

If you Google melanoma images, you’ll be presented with conspicuous, big black lesions that are so obviously cancerous that it’s a wonder they weren’t discovered well before they got to that point. That’s NOT what my melanoma looked like, which is why I feel it important to raise awareness on this potentially lethal condition.

For the most part, my melanoma was the same shade of brown as all the other moles and freckles on my body, except that it had developed a reddish/pinkish hue in the center of it. Knowing that melanomas are usually black (or so I thought), I didn’t think too much of it. After all, I’d had that particular mole looked at some years prior, and all was good then. Yet, over the next few months, I’d catch glimpses of it in the mirror every now and then and think to myself that I probably should get it checked out, if only for my own peace of mind. I finally did in June while I was at my primary care physician’s office for a completely unrelated matter. It was an afterthought then, the mole, and it was only at the end of the appointment that I remembered it, sheepishly asking the nurse practitioner to take a look at it, as I figured doing so would probably just turn out to be a giant waste of her time. After spending an inordinate amount of time looking at it she said that, although she thought the lesion to be benign, she wanted to have one of the doctors in the practice take a look at it. That should have been clue #1.

When the doctor came in, it was clear he expected to be able to take one look at the mole, pacify my concerns, and send me on my merry way. Unfortunately, that’s not what happened. You know something’s not right when a medical professional lets out a genuinely surprised, “Oh!” when looking at something on your body. That should have been clue #2, but sheer denial had prevented me from piecing everything together. After all, according to Google, my mole looked nothing like melanoma. It was decided then that the mole should be removed.

After three separate pathology reports from Bronson (who weren’t entirely certain, but strongly suspected the mole to be melanoma, so they deferred it to Mayo Clinic to deliver the bad news) and then, finally, U of M, my diagnosis was confirmed: Superficial Spreading Melanoma (which, if you’re going to get melanoma, that’s the type you want to have) with no ulceration (another good characteristic), and a low mitotic rate (meaning it was slower growing). However, remember when I said just a millimeter can make the difference between a good prognosis and a poor one? Well, the kicker for me was the depth of my tumor. At 1.5 mm, my melanoma was considered invasive (a depth of only 1 mm dramatically increases the risk of the cancer having spread to the lymph nodes). I was tentatively staged at a Stage 1b (with a 93% likelihood of being alive in 5 years). Had my tumor been ulcerated, my depth would have put me at a Stage 2a (with an 81% chance of surviving 5 years). But I was assured by the U of M Melanoma Clinic and my oncologist (I’ll never get used to saying “my oncologist”) that my melanoma was an early catch and the odds that it had spread were only 15-20% (which, when it pertains to you, may as well be 80-90%).

If the cancer had spread to my lymph nodes (Stage 3), my odds of survival in the next 5 years would be reduced down to 40-78%, depending on how many nodes were affected. Because, as it turns out, this JUST skin cancer is a tricky SOB with the capability of traveling ANYWHERE in the body it pleases, often landing in organs such as the lungs, liver, and brain. It can also remain dormant in a person’s body for months, years, even decades before reappearing again. In order to figure out whether or not my melanoma had spread, I was scheduled for a wide excision and a sentinel lymph node biopsy on September 21st (two agonizing months after my initial diagnosis).

For two months, I waited, unsure whether I would remain at a Stage 1 or become a Stage 3 (I didn’t even want to consider Stage 4). Would I be able to make plans for next year? Would I get to see my girls grow up? There was so much uncertainty and the not knowing whether I still had cancer in my body and where it had traveled was, at times, unbearable. It seemed like September 21st would never arrive, but arrive it eventually did.

After my surgery, my husband was shocked to see the 15 staples that closed the incision on my back, an incision that runs from one shoulder blade to (almost) the other. Such an incision is standard for melanoma to ensure that they get any remaining cancer cells that may have been left behind from the initial biopsy. Along with the incision on my back, I have another two inch incision underneath my arm from where six lymph nodes were removed and biopsied to see whether the melanoma had made its way down there. Approximately 99% of the time, melanoma, if it has spread, will travel to the nearest lymph nodes. These lymph nodes are found during a painful procedure called a lymphoscintigraphy, where a radioactive dye is injected at the site of the melanoma and is tracked to see which lymph nodes it travels to.

The week following my surgery, I was a nervous wreck waiting for the pathology results, knowing that with each day that passed, the more likely it was that the call coming in would be from my oncologist’s office with results that could undoubtedly change my life forever once again. That call finally came on September 28th and the results were that there was no residual melanoma found in my back and all six lymph nodes came back negative for cancer cells. I would remain a Stage 1b.

I feel as though I dodged a bullet and am unbelievably blessed that my cancer hadn’t spread, considering I allowed a mole that so obviously had changed go for at least six months before finally getting it checked out. Had I gone in as soon as I initially noticed it, I may never have progressed to a Stage 1 and could have spared myself two months of torture. Now, I will forever be looking over my shoulders (both figuratively and literally) as there is always a chance (albeit a small one) of a recurrence, and I’m also at an increased risk of developing another primary lesion (as are members of my family). This is why I implore anyone who may not be going in for regular skin checks to get your skin checked. Don’t ignore any new moles or freckles that have suddenly appeared on your body (no matter how small), and in particular, never ignore one that has changed in any way (whether shape, color or size). Above all, please quit using tanning beds. I have no doubt that the use of them in my late teens and early twenties helped contribute to my development of melanoma at the age of 35. In the cancer world, tanning beds are considered a level one carcinogen and are on the same level as cigarettes in terms of the damage they do to your body.
Posted by Sara Furlong-Burr at 12:21 AM